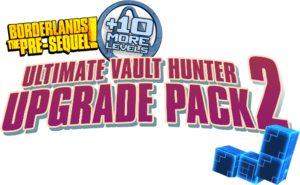 Ultimate Vault Hunter Upgrade Pack 2: Claptastic Voyage is a downloadable content pack for Borderlands: The Pre-Sequel. It adds a new story campaign, new locations, a new weapon rarity and a customizable, repeatable slaughterdome arena. As a final addition, the level cap is increased by 10.

After the conclusion to Borderlands: The Pre-Sequel, Handsome Jack learns that Tassiter hid a powerful, top secret code deep within Claptrap, dubbed the H-Source. To extract the H-Source from Claptrap, Handsome Jack digitizes his Vault Hunters and sends them inside Claptrap's mind to obtain it. What seemed like a simple task turns out to be not so simple...