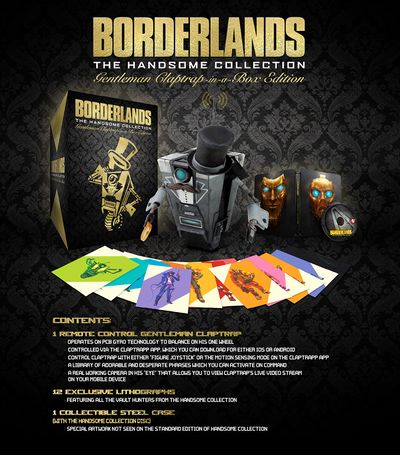 Borderlands: The Handsome Collection, which includes the critically-acclaimed Borderlands: The Pre-Sequel and Borderlands 2 in one package. All bonus add-on content, adding hundreds of hours of gameplay at an incredible value*. Transferable save files from Xbox 360, PlayStation 3, or PS Vita onto the next-gen consoles with cross-save functionality**. Cooperative gameplay for up to four players, either online or local. Upgraded Four-Player Split-Screen for same couch gameplay.

An iOS and Android app-controlled Gentleman CL4P-TP unit, complete with a variety of gadgets such as a camera, a variety of playable phrases, and a microphone to communicate through its speaker. Includes all available downloadable content for Borderlands 2 and Borderlands: The Pre-Sequel as of March 24, 2015. Internet connection as well as a PlayStation®Network account or an account on the Xbox Live online entertainment network from Microsoft is required to download certain add-on content. Save transfers must be between same console family. e.g., Xbox 360 to Xbox One.